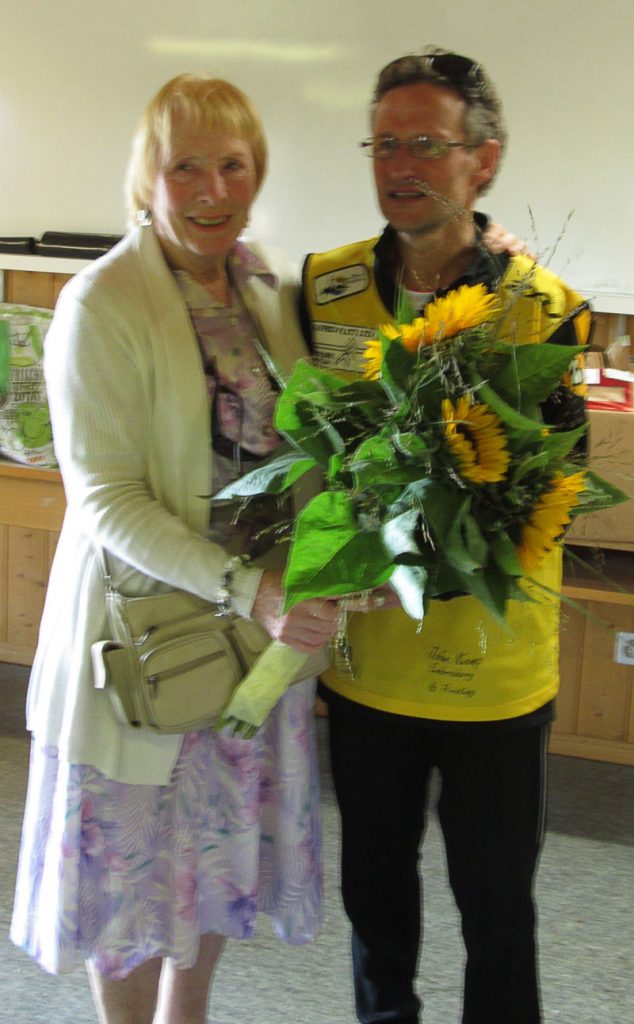 Photo: On the occasion of my 100th ultramarathon in Brugg, Switzerland, September 2016

My new web site was supposed to have been launched on June 13th, the very day I should have departed for New York and the Self-Transcendence 3100-mile race. Fate intervened, however, when a phone call came through at 9pm on June 12th informing us that Elizabeth had advanced lung cancer and would need to be escorted to Aberdeen for further tests and assessments.

Like a ‘lightning bolt’, my thoughts and plans changed like a flash and with immediate and total acceptance my new focus, from that point on, was to support Elizabeth mentally, physically and emotionally during this new, uncertain journey we both faced.

That journey turned out to be tragically short, as within 24 days she had passed away. Having left our home in the Orkney Island of Sanday, she never returned. She eventually made it back as far as Kirkwall, following a two-week spell in the Aberdeen Royal Infirmary, but was simply too ill to make that last ferry journey home. She died aged 74.

Elizabeth really was a one-off, she lived life by her own rules. The three words that possibly describe Elizabeth best are ‘kind, welcoming and colourful’.

She invited me into her life in Sanday in May 1982 after knowing me for just 3 days. She told me years later that she “thought I had my head screwed on!” That was Elizabeth. In many ways, it was opposites attracting, but we formed a loving and supportive partnership that endured 35 years and grew deeper as the years passed.

Elizabeth took to island life like a duck to water and became part of the glue that makes the Sanday community great, participating in countless aspects of island life over the years.

I grew as a person and developed my running career with Elizabeth and our daughters, Tanya and Bella, by my side. She wasn’t really interested in sport, unless I was doing it, but became an important part of ‘Team Sichel’ in her own way, as my running career blossomed.

My Crew Chief, Alan Young, summed it up nicely:

“Personally, I have known Elizabeth since 2004, and shared many telephone conversations as she relayed news from their beloved Island of Sanday, to many race venues throughout the World.

William always says it is a team effort and although Elizabeth only went to a handful of his races, she was the backbone and glue that has made “Team Sichel ” so successful.”

Elizabeth’s great legacy here in Sanday is her garden, which she developed painstakingly, year by year from a barren wilderness into a series of diverse and colourful plantations that are quite extraordinary by any standards. Her garden evolved organically over 35 years and changed as her capabilities changed. “Elizabeth’s Memorial Garden” will be maintained and continue to light up that part of the island for evermore.

Elizabeth is survived by myself, Tanya, Bella and her three, beloved grand-children Logan, Laila and Tilly.